Hi, I'm Elisabeth and I'm from Maine. It's snowing there right now, and it's almost 80 degrees here in New Orleans, so I'm glad to be in this new and different city and to be working and learning with Heinz.

My woodworking "career" began in September of 2012, when I entered an apprenticeship at the Carpenter's Boatshop in Pemaquid, Maine. The Carpenter's Boatshop is a wonderful place that accepts 10 or 11 apprentices each year into its nine-month program that teaches students the basics of hand tools, small wooden boat building and restoration, some furniture making, and simply an appreciation for the process of working with wood and for craft and craftsmanship in general. The experience was life-changing, but in a gentle and expected way that made me say to myself, "oh duh, of course I like this. I feel like I've been doing this for my whole life."

After I finished at the Boatshop in June, my uncle hired me as a carpenter's helper for the summer. Mostly I destroyed things and pulled nails, and all the other stuff that no one else wanted to do, but I also learned a lot and loved going to work. However, I did often think back longingly on the hand tools I had used the previous winter and missed that striving for the precision required to make a tight joint in a boat or fit a tenon into a hand-cut mortise. Which is why, when I heard that my friend Kaitlyn was doing a woodworking apprenticeship in New Orleans, my interest was piqued.

I was visiting the city with a friend from high school, quite randomly, not even thinking about the fact that Kaitlyn was here. But when I realized our timing here coincided, I gave her a call, and came in to visit the shop and meet Heinz. After I got back to Maine, I started to wonder what was next. I had recently returned from a long WWOOFing trip in Europe with my mother, and was starting to feel a greater sense of urgency to find something fresh and meaningful and to DO. I thought back on my visit to the shop, and it all made sense.

So, in short, I arranged to come down here, worked in Maine for a few weeks and said bye to friends and family, and then attempted to drive my car here from Maine. It broke in New Jersey so I got a ride with some Russians I found on Craigslist who were driving down from Manhattan for St. Patrick's day, and here I am!

Project #1: Swan bowl
My first project is a bowl, which I started last Monday. After an hour or so of contemplation on my first day, I decided that making a bowl that looked like a swan would be appropriately interesting and challenging. I modeled the swan with clay, and then started in on my piece of Mahogany: 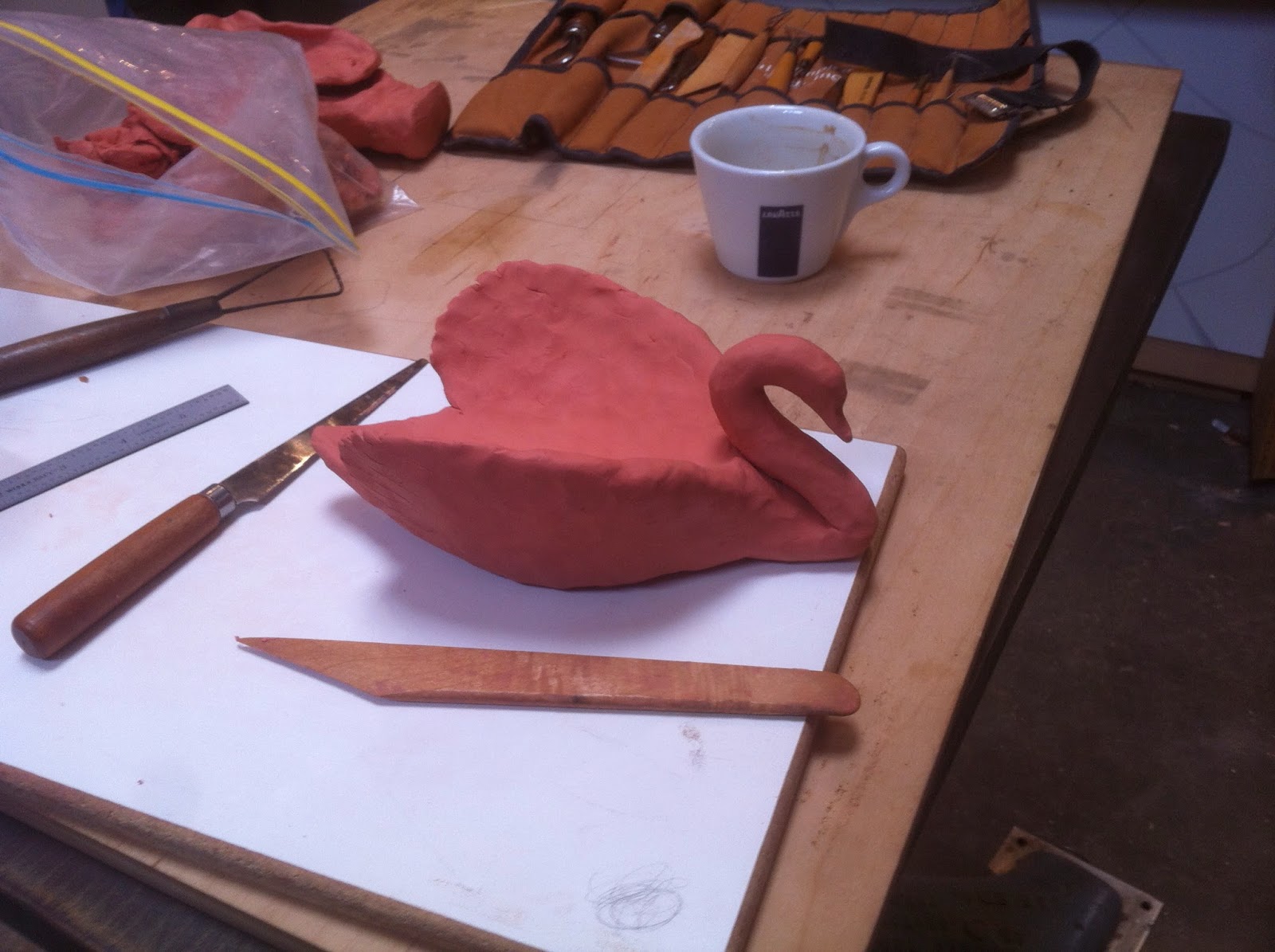 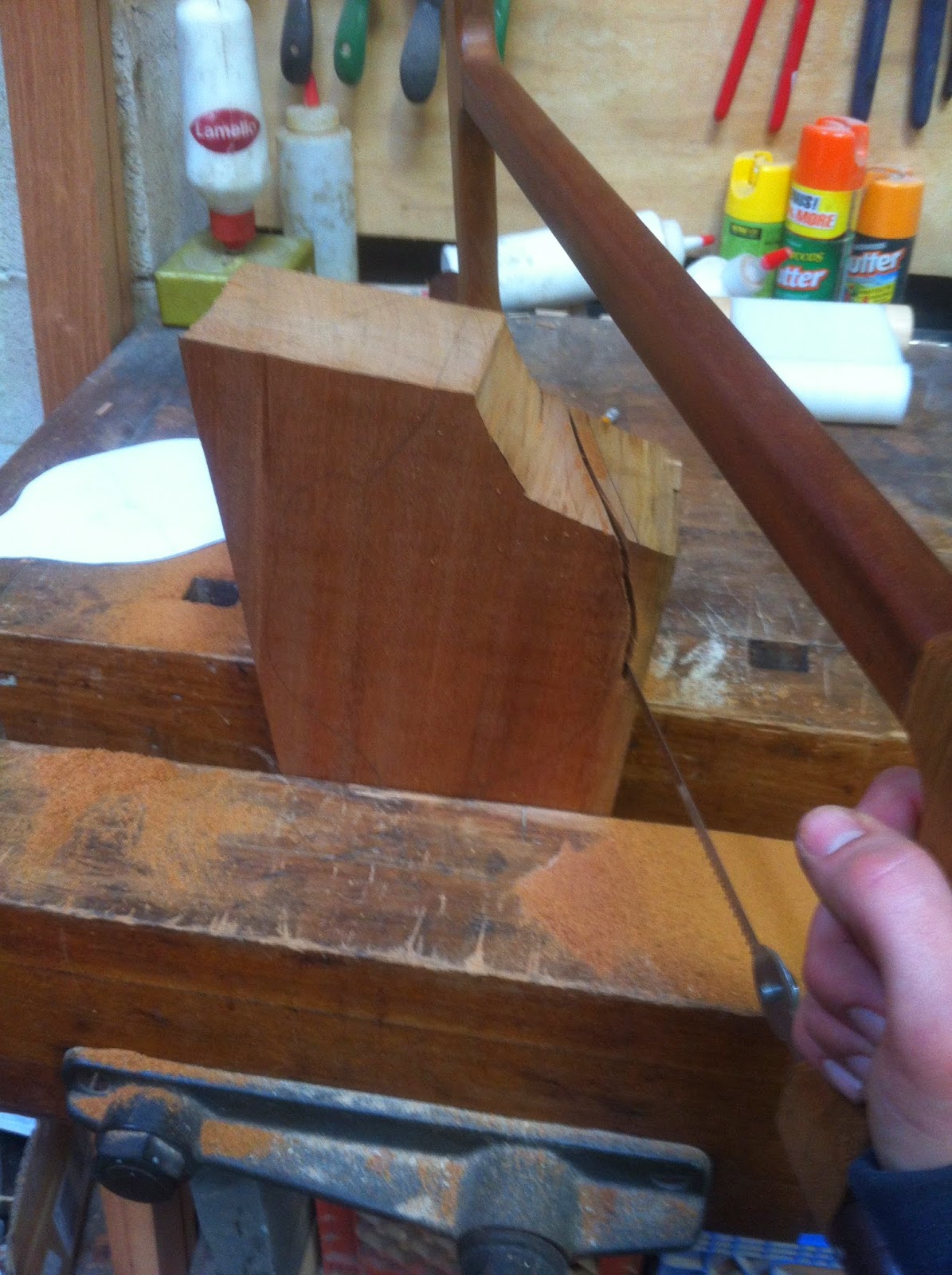 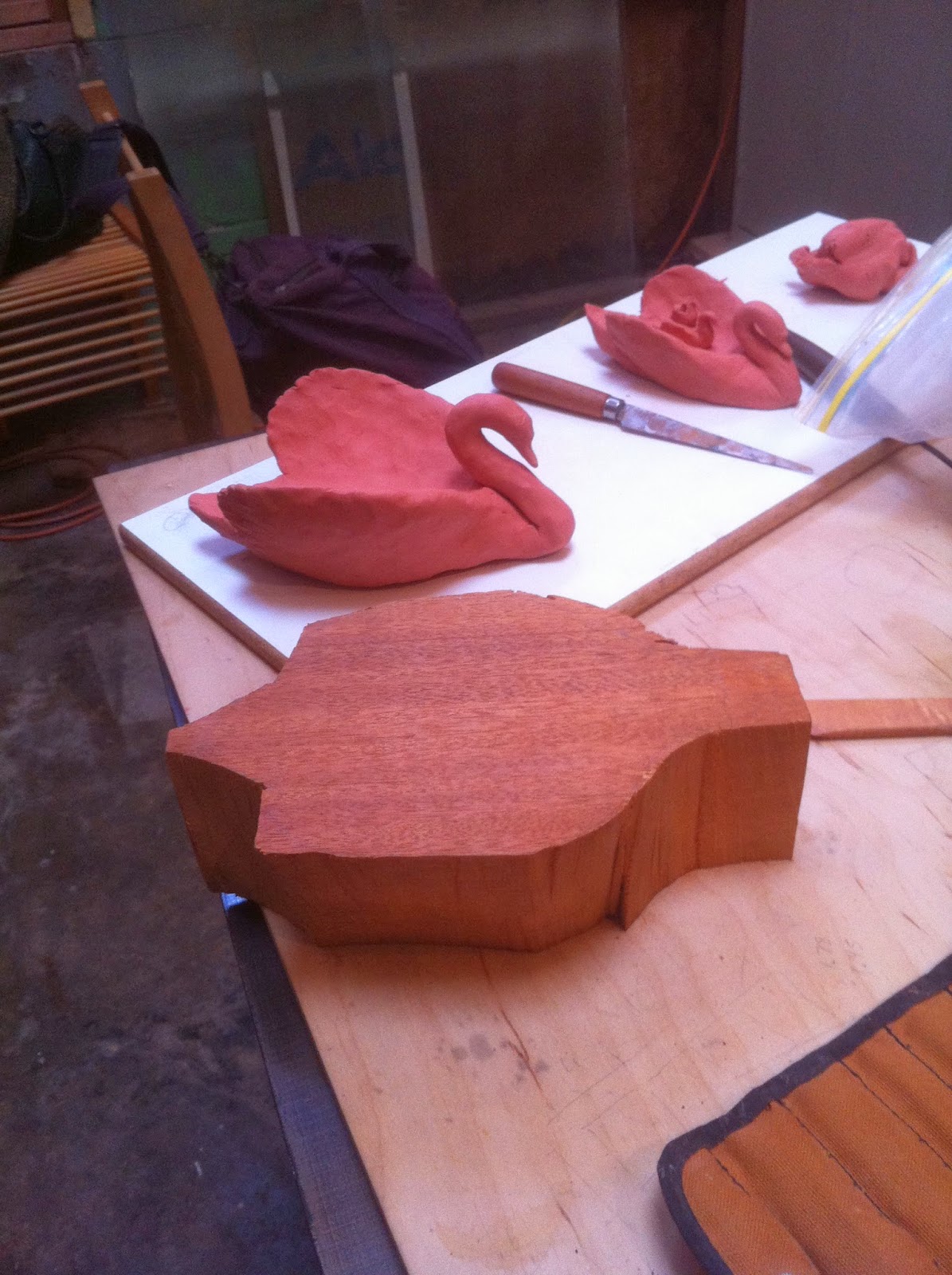 Next, I glued it to a piece of scrap wood so that I could more easily clamp it while I carved. After waiting over night for the glue to set up, I was able to get a good start on roughing out the outside of the bowl and hollowing out the middle: 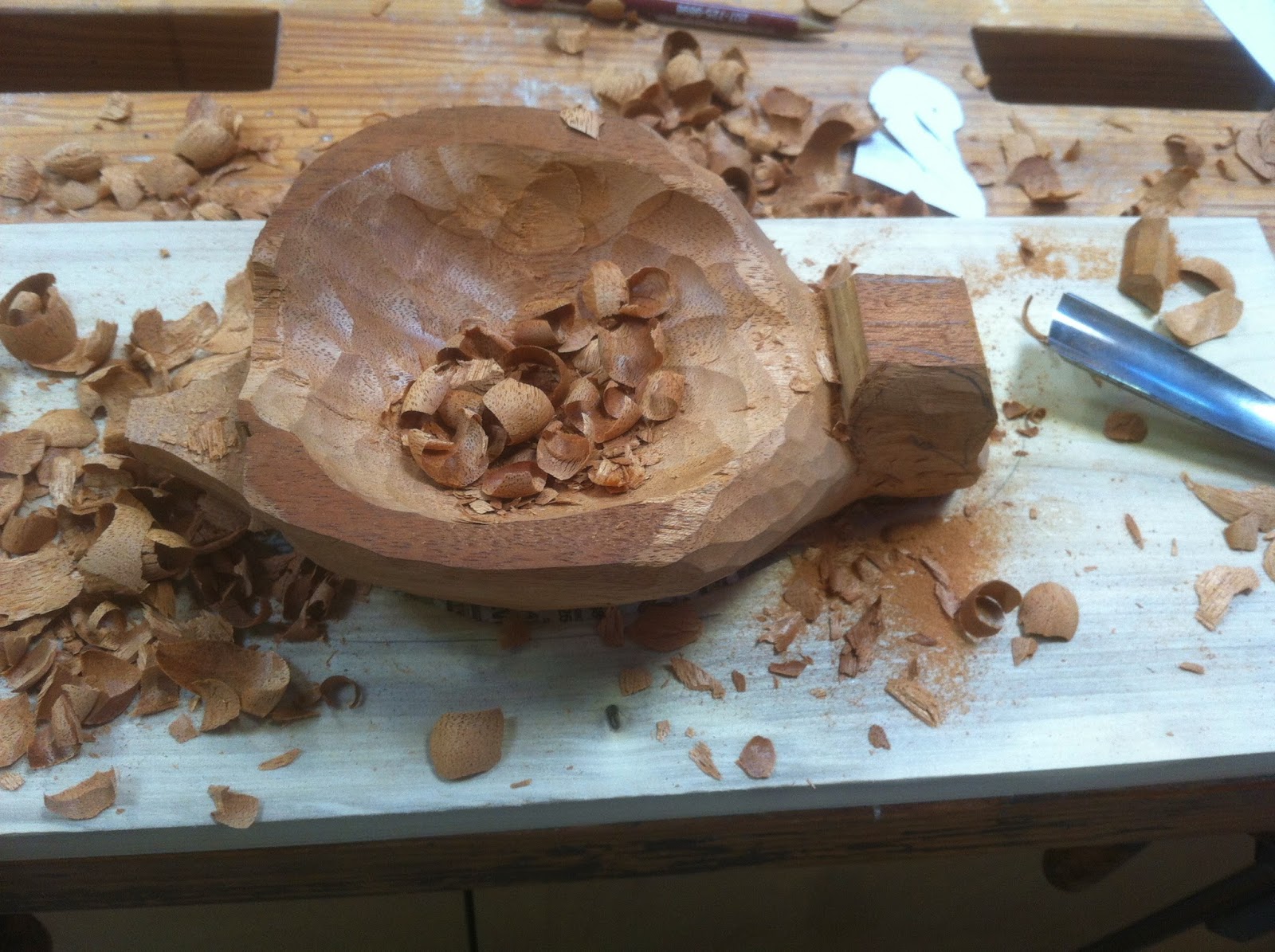 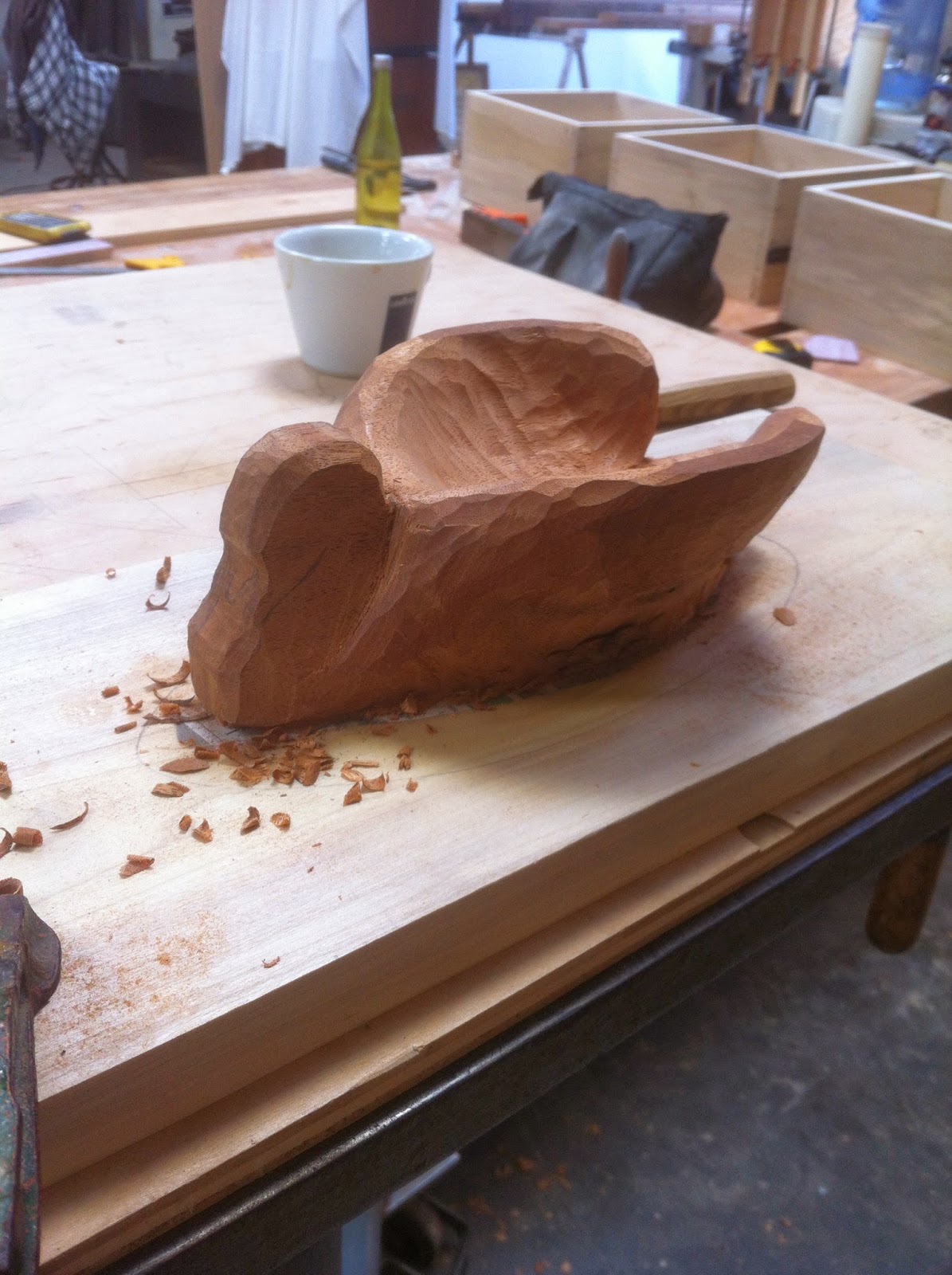 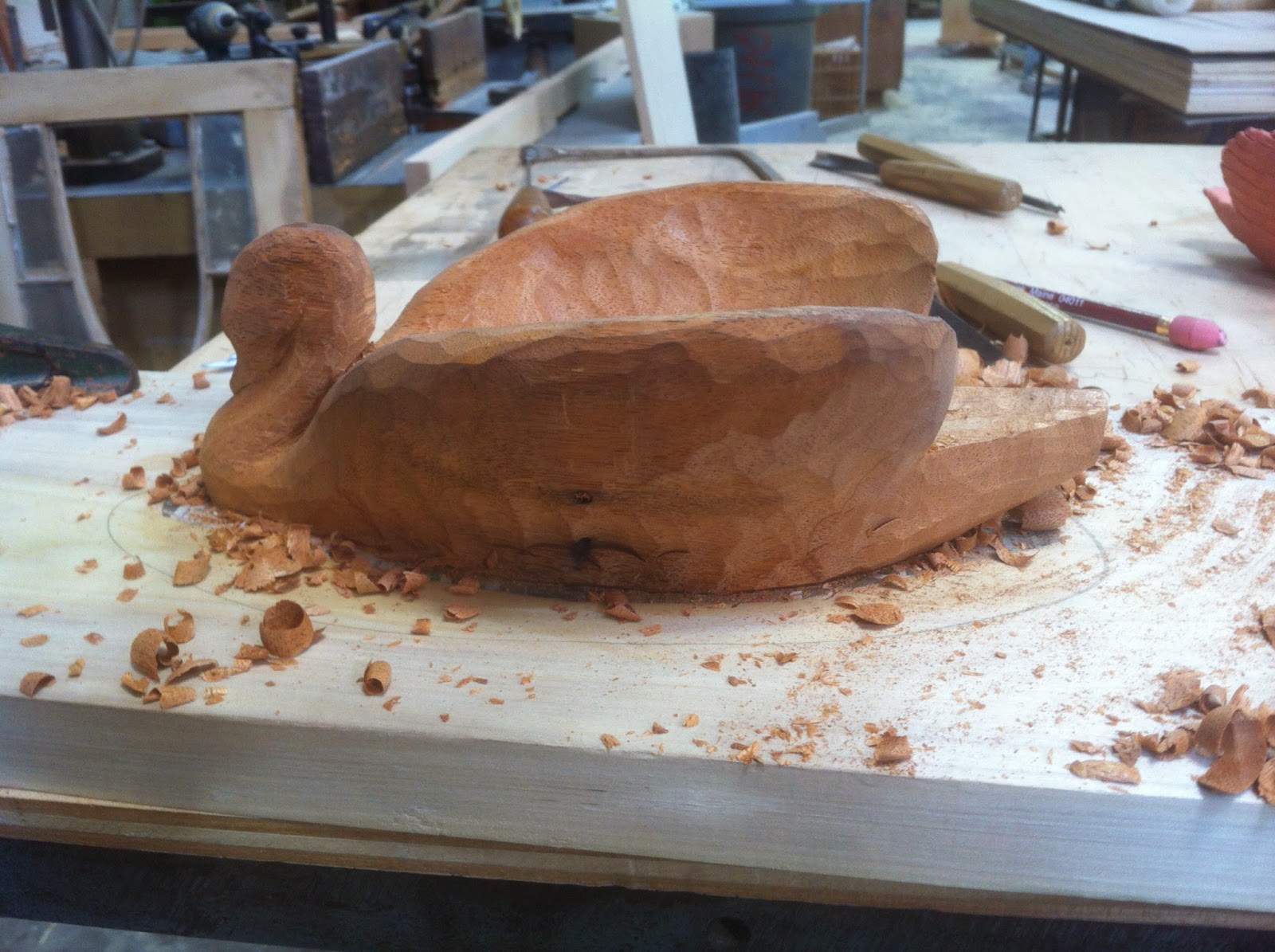 Once I had established the general shape of the "bowl" of the swan, I began to smooth it out as much as possible, ensuring meanwhile that the bowl's shape was right and its curves relatively fair. When I had gotten it as close to finished as possible using only the chisels, I sanded it smooth using 120 then 150 grit sandpaper. 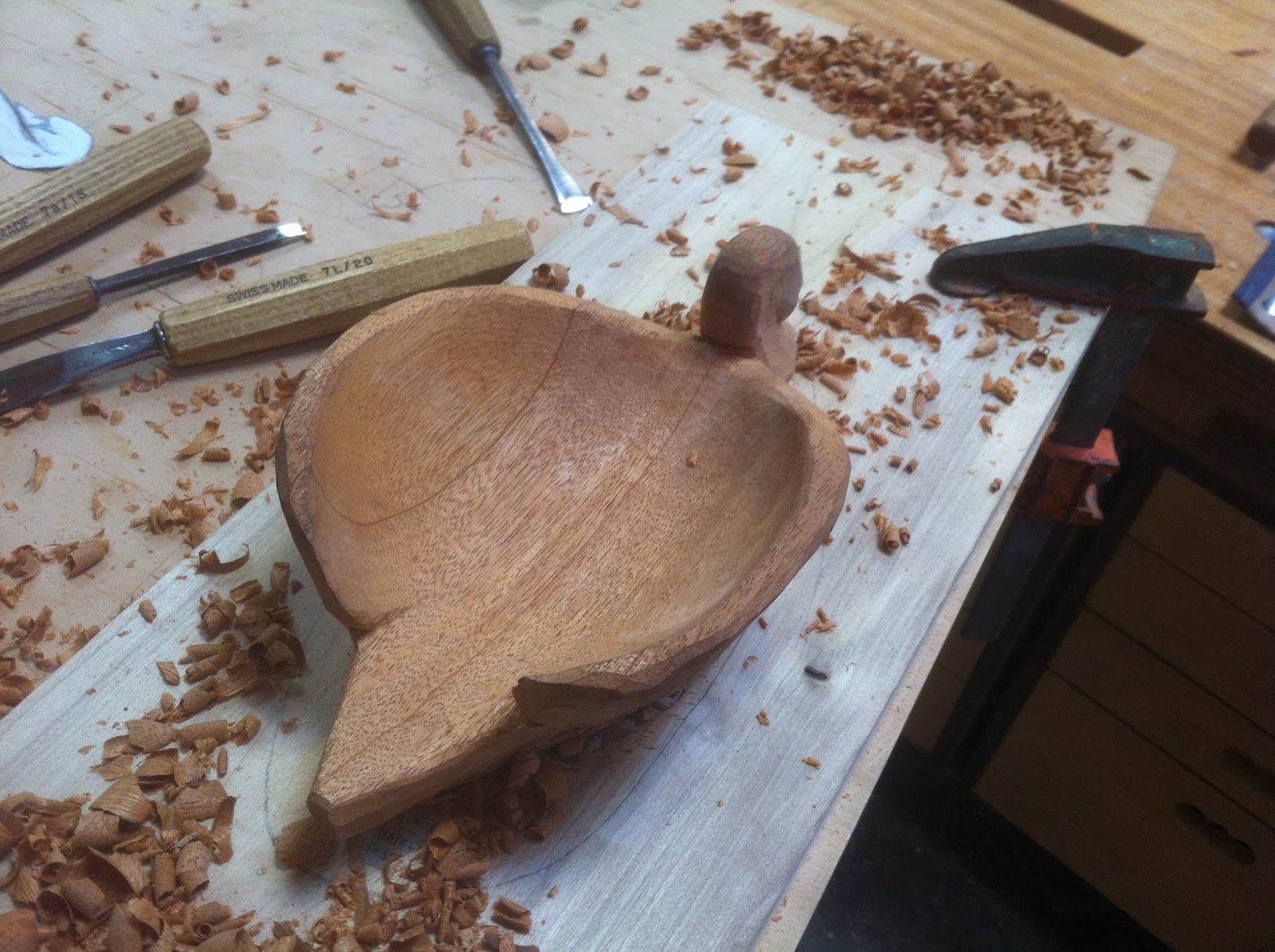 and made use of creative clamping in order to work more on the outside. 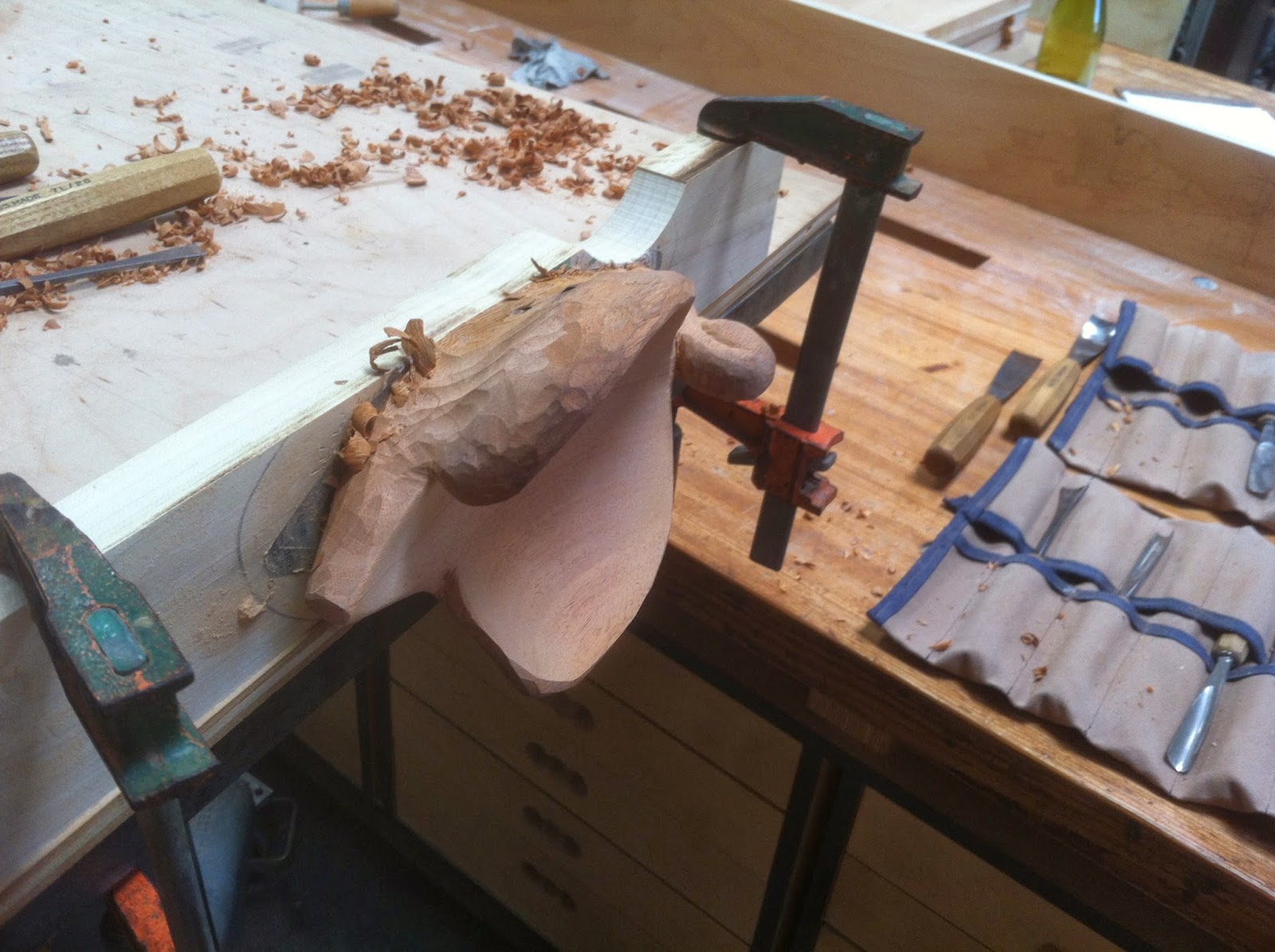 Yesterday, Monday, March 24, my sixth day in the shop, I finally started to work on the details on the outside of the bowl. Specifically, the feathers. After a lot of practice and sketching, and feeling very nervous that I was going to ruin the bowl with my attempts to decorate my swan, I finally attempted this pattern: 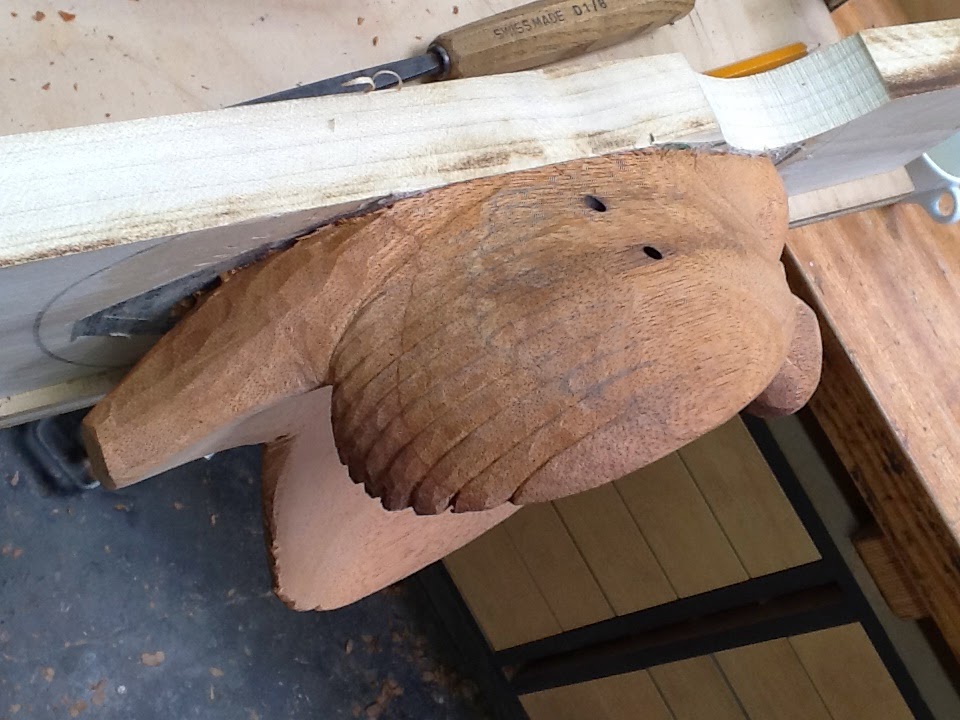 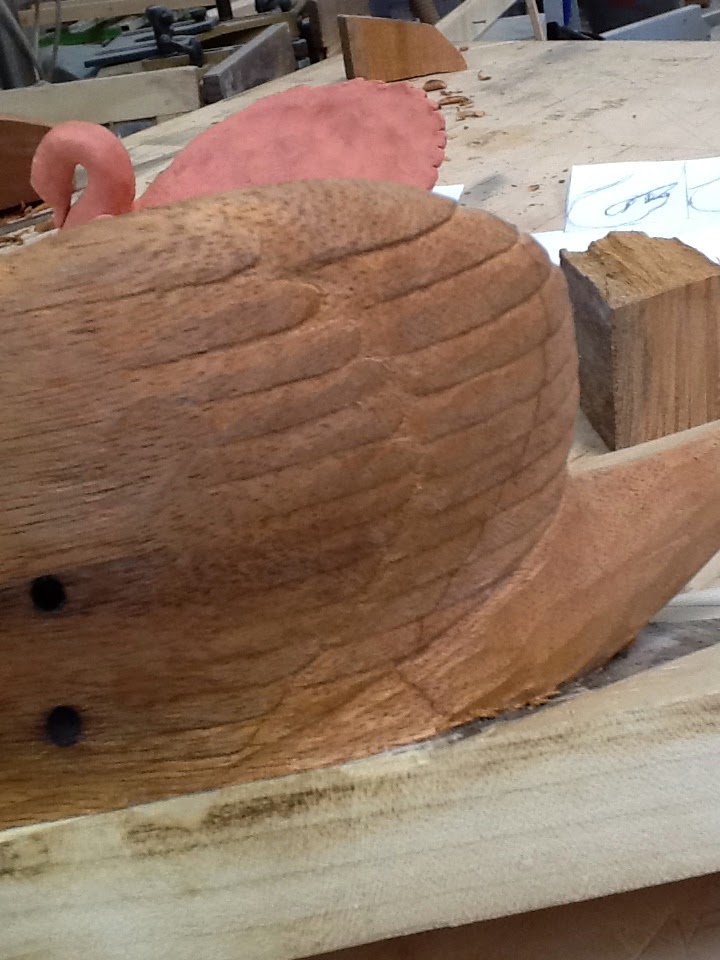 And eventually started in on the face, trying to make it look more like a swan, rather than a duck. I was even more nervous about touching the face than the wings! 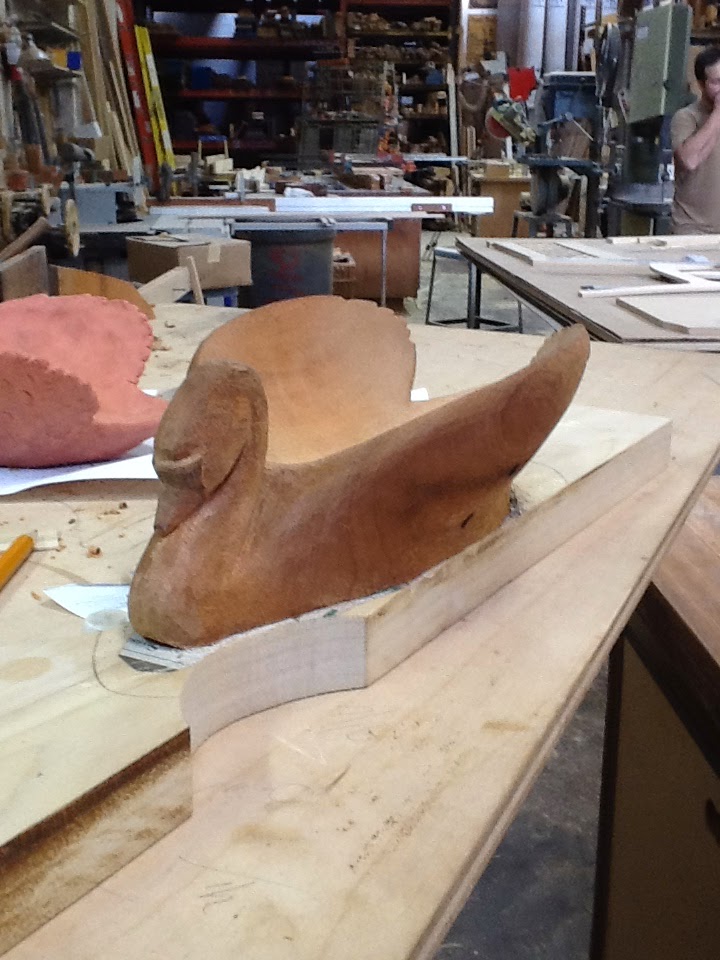 Today I finished the carving part, maybe. I smoothed out the wings with a chisel, deciding not to sand the outside, since that texture seems more feather-like than a smooth surface.
So here it is! My week of hard, focused work. I'll show more pictures once it's actually finished. Of course there's always  more to do and tweak, but I'm feeling pretty good about it. 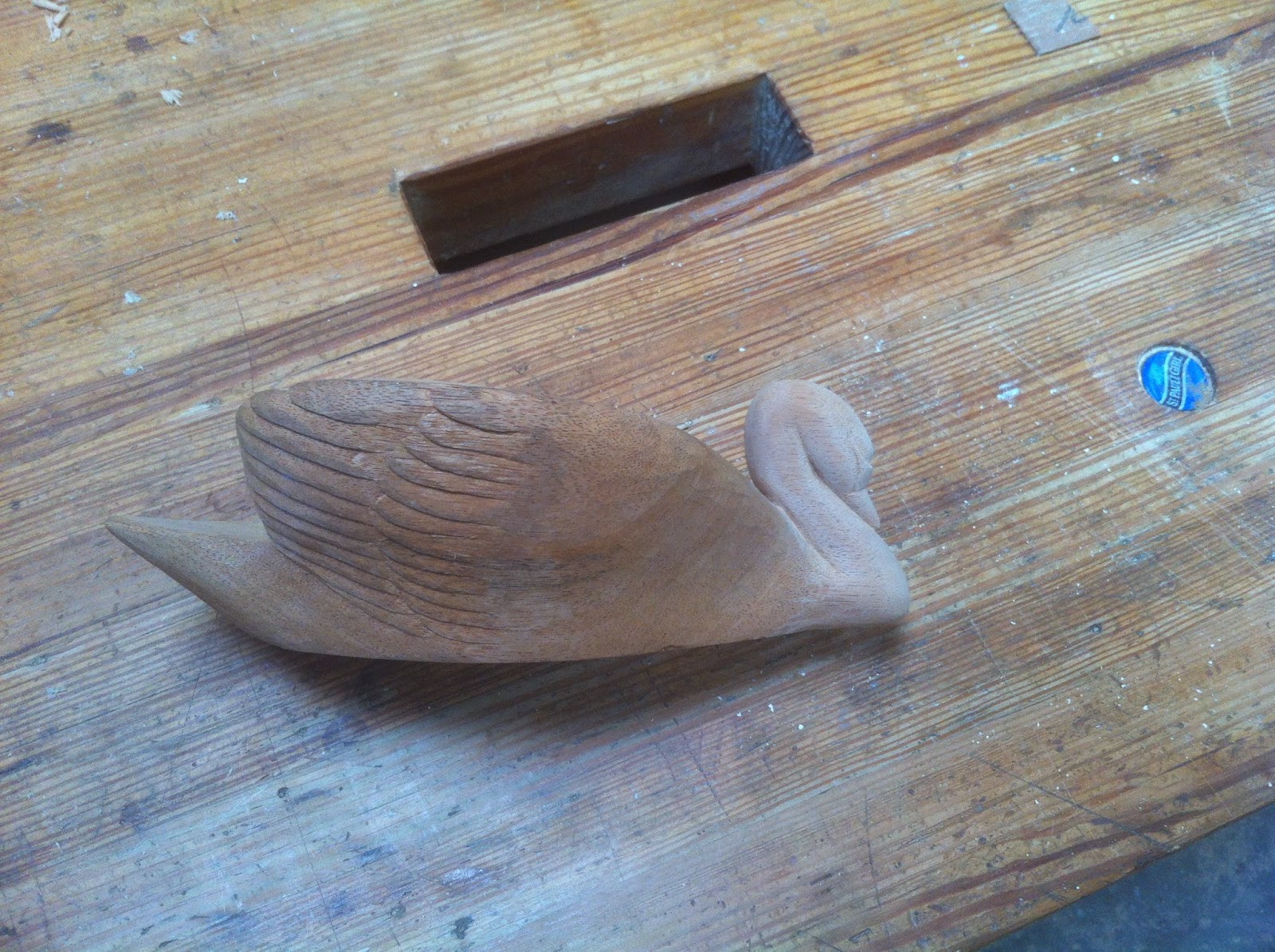